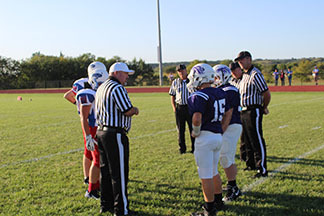 The Junior High Mustangs football team faced Blue Valley-Lucky on October 17th. This was the second meeting between the two teams. Valley Heights went on to win both of the games. The team played platoon football, which means they split up the team into three small eight teams. “We played decent, but we made a lot of mistakes. We still came out on top and finished the season 5-2.”

“Everybody got to get in the game and see the field. Even though the original starting team didn’t play together, we still won big, and this will only prepare us for the future.” Said Mack Shanks. The Mustangs finished at the top of the BVL finishing 2nd behind Clifton Clyde.