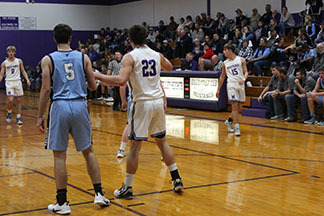 The Valley Heights Lady Mustangs took on Riley County for their first game of the season and were looking for a great start. The JV girls took the floor first and played tough but lost in a close matchup. The Varsity girls took the floor next and it was a competitive game, they were trailing at half and were not able to make up for the deficit. The girls came up short in a close matchup 52-40. Sam Vermetten lead the girls in scoring with 13 points followed by Emma Toerber with 12. “The team played pretty good for it being the first game of the season,” said  senior Sam Hardin. “We figured out what we need to work on and improve on so we can be better throughout the year.”

The Valley Heights Boys started off the season against Riley County as well. The JV boys began the night in the Blue Rapids gym. The boys started off hot going into half on top, but Riley County was able to come out with the win. The freshman team also played a half of a game and were not able to get anything started and lost but played tough. The varsity boys began the night hot as well but slowed down before half and were behind at half. They ended up being beat in a close contest 55-44. “The team played very good at times but there were times the team played very lazy,” said Bryson Kenworthy. “The team has a lot to improve on and we need to set it straight against Marysville on the 10th.”