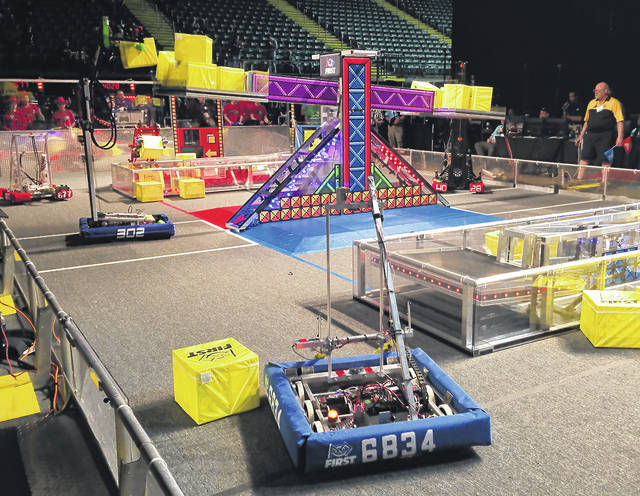 NUTS, BOLTS, AND ROBOTS. On December 7th the Robotics team at Valley Heights competed in Omaha, Nebraska. Their season started at the beginning of the school year with a total of 14 members. “This year Gabe Hutson and I wanted to try something new, so we joined Robotics, and we ended up loving it. While the season did not go as well as we wanted it to go, it was amazing to compete and learn. I learned so much; not only how to drive or operate robots, but also just experiencing different life skills at the meets,” said Trey Martin, Senior. The season for these two boys came to an end on December 7th. However, the end of the Robotics season is in April. Only two teams from the club will be competing up until April, though. The two teams being Kris Jamieson, Freedom Williams, Sam Caswell, Chase Morris and John Heafke.

At the Robotics meet two weeks ago, four out of the five teams at Valley Heights competed. The teams consisted of Trey and Gabe, Kaitlin Chilson, and Gates Carder, Sam and Chase, and Logan Sprague and Jake Winslow. They started the day checking in, and then heading down to the pit to prepare their robots. The day ended with four teams competing in a total of seven rounds, none making the finals round. While none of the teams made it the final rounds, all teams claimed they know what they will do differently next time and know what it will take to get to the finals round. “I consider myself a teacher facilitator, who teaches programming and engineering and gives constructive criticism, suggests new ideas and is a helping hand to all students. I like the freedom they have to plan, design, and engineer, test and retest, and then go back at it again whether it’s at practice or competition.” said Mrs. Laughlin, the sponsor and teacher for the Valley Heights Robotics team. The upcoming tournaments are in Topeka, Derby, and Cheney. At then end of February, the two teams who will (Kris, Freedom, Sam, John, and Chase) will find out if they qualified for state.