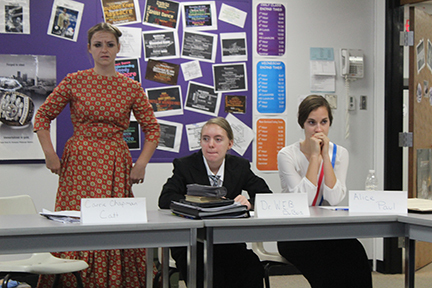 JUNIOR PROGRESSIVES. The Valley Heights Junior English classes participate in their annual Progressive Panel. Junior English is a history based cross-curricular course that involves a variety of history lessons, historical readings and activities beginning with the post-civil war era. Right now, the junior class are in the middle of reading All Quiet on the Western Front, a story about a boy fighting in World War I. Along with the reading of this book, the students have been studying the Progressive Era.

The Progressive Era (1900-1920) was a period of widespread social activism and political reform across the United States. The main objectives of the Progressive movement were eliminating problems caused by industrialization, urbanization, immigration, and corruption in government. In their activity, each student is assigned a Progressive contributor to conduct a research paper on. After the students finalize their research paper, they participate in a panel where they dress and play the role as the Progressive they’re studying. The juniors sit around a table and have a discussion and arguments over what reforms they believe in, why, and how they’re going to alter it.

Famous Progressives the students represent include: Teddy Roosevelt, J.D. Rockefeller, Andrew Carnegie, Ida Tarbell, Carry A. Nation, Carrier Chapman Catt, Alice Paul, Jane Addams, Louis Hine, Upton Sinclair, and others. The students study everything between muckrakers, industrial leaders, presidents, and suffrage enthusiasts. The issues the students discuss amongst each other are prompted by English instructor, Mrs. Jennifer Yungeberg. Areas of discussion include topics such as women’s suffrage, child labor, problems in the workplace, monopolization, corrupt capitalism, corrupt government, etc. “The Progressive Panel is one of my favorite units to teach,” says Mrs. Yungeberg, “the role playing really allows the students to delve deeper into their research and the person they’re portraying.” The students conducted their panel on September 26 and 27.