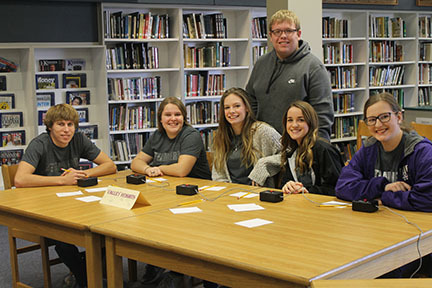 The Star Spangled Banner was written by Francis Scott Key while watching the bombing of Ft. McHenry during which American war? The correct answer is the War of 1812. Questions like that are typical in Scholars Bowl.  Scholars Bowl is a team based activity that quizzes two teams on a series of topics spanning from foreign language to math and even fine arts. 10 points are awarded to the team who buzzes in the fastest with the correct answer. The season starts in late October and ends Mid-February. Four-year competitor and senior, Skyler Saunders says, “Scholars Bowl is a great way to learn new things, and I love the feeling you get when you win a tough round.” January 24, the Scholars Bowl team travelled to Centralia for their TVL Tournament. The Mustangs went 3-3 in pool play and just missed making it into the final round. Millie Laughlin has been coaching Scholars Bowl for 16 years. “I love getting to work with the kids outside of the classroom. It lets me get to know a different side of them.” The Scholars Bowl team is now preparing for Regionals, in the hopes of going to State.