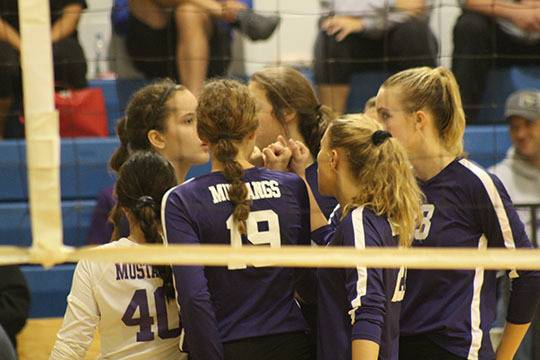 The Valley Heights Varsity Volleyball Team faces tough competition in Axtell. A wise individual once said, “A good team can win a volleyball game when they are ahead, but only a great team can win when they are behind.” The Mustangs proved this statement to be true at their tournament, that took place this past Saturday, September 22, in Axtell.

The team kicked off the morning with their first match, against Diller-Odell. After two hard fought sets, the girls fell to their opponents. However, they quickly turned things around, battling during their next match, against Frankfort. After losing a close first set, the Mustangs found a rhythm and defeated the Wildcats, taking the match to three. The girls then used momentum from the prior set to propel themselves forward, and easily won the final set, 25-15. “I was extremely proud of how we played as a team, especially because of the many adjustments we made only minutes before the game”, says Jr. Kate Wanamaker, the team’s Defensive Specialist. “We had a lot of girls step up, and they handled the pressure well.”

Unfortunately, mid-morning, the team was defeated in yet another hard fought battle to three sets, this time against Lourdes-Central. Despite the loss, the Mustangs turned things right around and defeated Linn, in the first game of bracket play. Following that win, the girls got a break before yet again facing off against the Frankfort Wildcats. Like earlier in the day, this match also went to three. Despite the relentless effort put forth, the Mustangs couldn’t quite pull ahead, losing the final set of the tournament 21-25. Despite the tough losses, Head Coach Susan Steinfort met with the Mustangs in the locker room after the game and stated, “You girls have nothing to hang your heads about. You fought until the end, and I saw a lot of good things happen today.” Coach Steinfort, as well as the rest of the team, agree that the tournament prepared them for future games. The Mustangs look forward to meeting Frankfort yet again, this time at home, on October 2nd (Parent’s Night.)