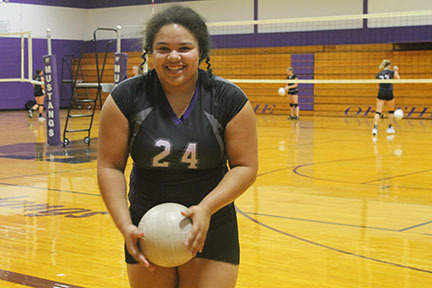 OUT WITH A BANG.
Kennedy Stevenson
Thursday, October 04, 2018

OUT WITH A BANG. The High School volleyball teams wrap up their regular season against Blue Valley and Washington County. Tuesday night marks the end of league play for the Lady Mustangs. Varsity hopes to cushion their record in preparation for Substate on October 20th hosted at home. Additionally, the JV and C-Team are hoping to end their season strongly with a win. The JV has a big week ahead, as they will be playing 10 matches within 4 days. Starting early Saturday morning, the JV plays a tournament in Washington, preceding a quad hosted by Valley Heights Monday night. Coach Kelly Smith says, “We asked a few C-Team players to step up and help make adjustments that I think will benefit us the next few days. Hopefully we can come together this week and give our last few games everything we’ve got so we can come out on top.” So far, the season has proved very successful. Currently, the JV is 9-4. When asked what the best moment of the season has been so far, junior Sam Hardin said, “It wasn’t a single specific moment. It’s being able to play and practice everyday with a special group of people that is different than the other teams. We aren’t the same personnel as varsity, we are our own unit with other strengths, and I love that.” If JV can capitalize on the matches left, they will be 19-4 on the season.