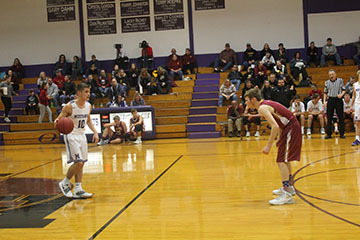 The Valley Heights boys and girls basketball teams make huge improvements on the court early this season. The varsity women kicked off their year with a record of 2-1, defeating both Marysville and Mission Valley, and falling to the Riley County Falcons in their season opener. The varsity men are also taking steps towards success, despite their current record of 0-3. Unfortunately, the Mustangs were defeated by Riley County in their first game and again, after a close battle in over-time, to the Marysville Bulldogs last Tuesday. The Mustangs also fell to Mission Valley after a hard-fought match-up on Friday, December 7th.

The varsity boys are led by team captains, Cole Coggins and Trey Martin. Their record is quite deceiving, as the Mustangs have faced some tough competition so early in the season. The boys are up for the challenge, however, and are working hard to achieve goals for later in the year. At practice, their main focus is non-stop effort at all times. In addition, the entire team can be found in the weight room at 6:30 in the morning, every Monday, Wednesday, and Friday. Team captain, Cole Coggins says, “Our overall strength as a team is our speed. We have some pretty quick kids.” Coggins also believes another strength is their young age. “The inexperience and lack of guys who have played a solid amount of varsity minutes might appear as a weakness. However, the young guys are getting a lot of time on the court, which will help in future years. We just need to stay out of foul trouble.”

The varsity girls are led by team captains Hannah Musil and Sam Vermetten. After a 2nd place finish at the state tournament last season, the Lady Mustangs are back with their eyes set on returning to the state tourney in March of 2019. Emma Toerber, Sophomore and two-time varsity starter for the Mustangs admits that, like the boys, the ladies are young. Despite being a young team, Emma believes her team is very experienced. “Our strengths as a team are definitely pushing the ball up the court and looking for open teammates. In addition, each of us has the ability to read the ball, which makes it easy to get steals,” says Emma. Her dedication to the sport and her teammates has helped in the Mustangs’ success so far into the season. Aside from practice, Emma and her sister, Catherine, try to get into the gym four times a week, usually before school. “Our weaknesses as a team, as of now, are being aggressive and strong, especially when rebounding. I also think our communication could be better. However, we are only three games in so we will see a lot of improvement and become a very good team,” she adds. Emma also goes on to say that her team’s main focus is to be a fast team that moves and distributes the ball all over the court, while also maintaining strength under the bucket.

The Mustangs will face off again at home on Tuesday, December 10, against the Frankfort Wildcats. Junior Varsity games start at 4:45 (girls HS, boys BR) and the Girls Varsity game tips-off at 6 o’clock. The Boys Varsity game will directly follow.