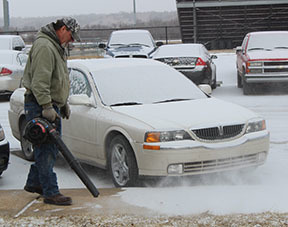 SNOW THANKFUL           According to mentalfloss.com, the United States has at least one septillion snowflakes drop every year. That’s 1,000,000,000,000,000,000,000,000-24 zeros! Although as a community we received nowhere near that amount, snow most definitely made an impact on student life this week. Due to various weather conditions relating to the cold, the Valley Heights school district carried through with three different cancellations or delays. With Monday’s school day being out of session due to a teachers in-service day, students were left with only a single full day of school. Slick roads, freezing temps, and snow drifts were all factors that led to the cancellation of nearly every one of the schools in the Twin Valley league. “Although we missed a lot of practice as well as a game, the days off school were relaxing and gave me time to catch up on sleep” said sophomore, Jackson O’Toole when asked how the cancellation days were spent. Some students reported they played video games, some went sledding, and very few stated they read their A.R Book. However spent, every student was thanking the weather for a much easier week than normal. Thank you, snow!