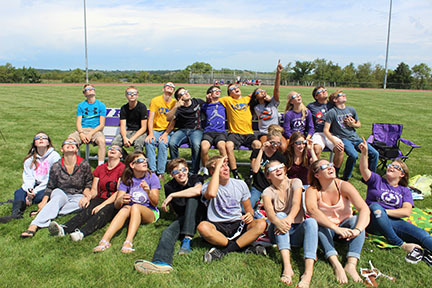 ONCE IN A LIFETIME. National Aeronautics and Space Administration (NASA) reports that at the midpoint of its livestream video, 4.4 million people were viewing the solar eclipse, making it the most viewed event in agency history. Valley Heights students and staff, part of that 4.4 million, saw 99.7% totality from the football field and schools.

Millie Laughlin, science teacher,  led the day’s activities along with new high school science teacher, Nicole McKinnon. Laughlin provided students with interesting facts throughout the day as well as tools and resources needed to view the eclipse safely and successfully. “I was awestruck by it knowing how rare it is for us here in Kansas. I hope to see a total eclipse in 2024. It was what I expected but to actually see it in person was spectacular,” said Laughlin.

Student activities included eating lunch outside and breaking out into class groups. From the press box, Laughlin and McKinnon described the stages of the phenomenon. Students were given the opportunity to document phases of the eclipse. Including the temperature drop and the 360° rainbow around the sun. “It was exactly what I expected”, said Nikki McCurdy, senior.

This once in a lifetime opportunity was best summed up by Bill Nye, science expert and television personality, “Experiencing an eclipse changes the way we feel about space and how we are connected. I hope this moment reminds us all that we share a common origin among the stars, and that we are all citizens of the same planet”.