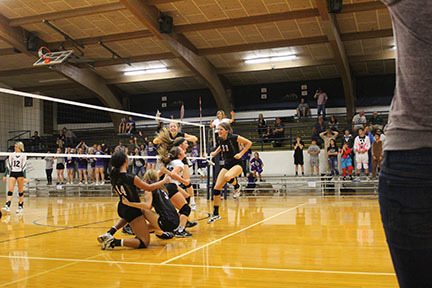 ROAD TO EMPORIA. The Valley Heights High School volleyball team finishes first in Twin Valley League and claims sub-state championship Saturday, October 21. To close the regular season, the Mustangs topped Blue Valley and Frankfort in league matches to secure the Twin Valley League title. The Mustangs’ only loss in the league was to the Hanover Wildcats, putting them 11-1 in league play. DeAndra Woodyard, senior, commented, “TVL is the toughest league in Kansas. Because of teamwork and our dedication, we were able to come out on top.”  It had been 10 years since the Mustangs won league, the last time being in 2008.

The following weekend the Mustangs went 2-1 in pool play at the Twin Valley League tournament at Blue Valley. They then fell to Centralia in the semi-final but got a win over Frankfort in the 3rd place match.

This past Saturday the Mustangs traveled to Salina-Sacred Heart looking for a trip to state for the first time since 2009. The Mustangs entered the tournament as the #3 seed and would match off against the Lincoln Leopards in the 1st round game. After a top-notch performance in their first competition, the Mustangs advanced to the semi-final game, facing the #7 seed, Republic County. The Mustangs sank the Republic County Buffs in straight sets and went on to face the #1 seed, Central Plains, in the championship match.

The Mustangs started off on top against Central Plains in the 1st set and secured the win 25-19. They then started off on top again in the 2nd set and claimed the victory over Central Plains in straight sets and won themselves a trip to the state tournament. “It feels great to finally reach a goal us seniors have been working towards for 4 years,” says Shea Manley, senior.

The Mustangs will travel to Emporia to compete in the KSHSAA State Volleyball tournament on Friday, October 27 and Saturday, October 28.