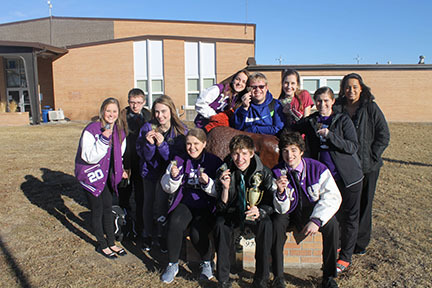 Forensics Famous. The Valley Heights Forensics team is back at it again for the 2018 season. With twenty-six members, the tight-knit group is optimistic about the season with plenty of state-qualifying returners and new talent. They started their season-opener at Republic County this past weekend.

On Saturday, the Mustangs showed off their talent by getting second place and one point behind first. State Champs Qualifiers include Alli Jones in Solo Acting Humorous and Oration, Bryan Yungeberg in Oration, Landon Woodyard in Solo Acting Serious, Hannah Musil in Informative and Duet, Rosa Blaske in Duet, and Haylee Whitson in Solo Acting Serious. State Festival Qualifiers include Konner Treff and Haylee Whitson in Improvised Duet Acting and Sam Hardin in Informative. Senior, and Forensics Captain, Alli Jones says, “I was really proud of our team and how we performed at the first meet. I think it shows how well we will do this year, we just have to continue to improve.”

As well as veterans leading the group, we also have promising and talented newcomers. New to the Valley Heights Forensics team is Robin Roberson who is excited to join the team as well. “I’ve done forensics in the past, but now doing it at Valley Heights, I’m really excited to join such a successful team,” says Robin.  This year, the Mustangs are looking forward to dominating in the regular season and making a forceful appearance at state in Wichita on May 5th.