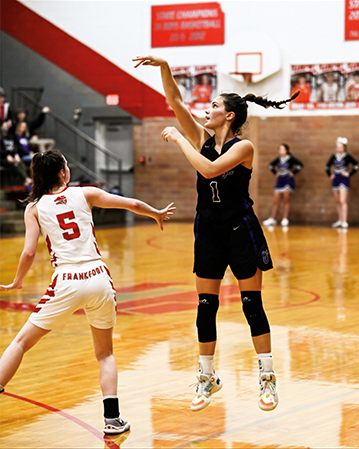 TOURNAMENT TIME. “We’ve been running scout plays in practice to get to know the other teams to prepare for the TVL Tournament. We will have played about half of the teams in the league by the first game of the tournament. We have great leaders on our team and I know that will be extremely beneficial during the tournament,” says sophomore Audra Steinfort. It’s the halfway point of the basketball season and all thirteen teams from Twin Valley League are traveling to Frankfort for the TVL Tournament. The Twin Valley League Tournament has been known as one of the best mid-season tournaments in the state for many years now. The Valley Heights girls are 7-0 as of January 7, 2022.

Looking at the boys side the Mustangs are 1-6. Sophomore, Kaison Bigham, says, “We’ve been working hard in practice gearing up for this weekend. We’ve had a rough start to the season but we’ve been working at practice to get better and hopefully clear up some of the issues. Overall we're excited to see what we can do Saturday.”

The boys will play January 15 at 2:30 against Troy. The girls have a bye the first round and will play Monday night at 6:15.