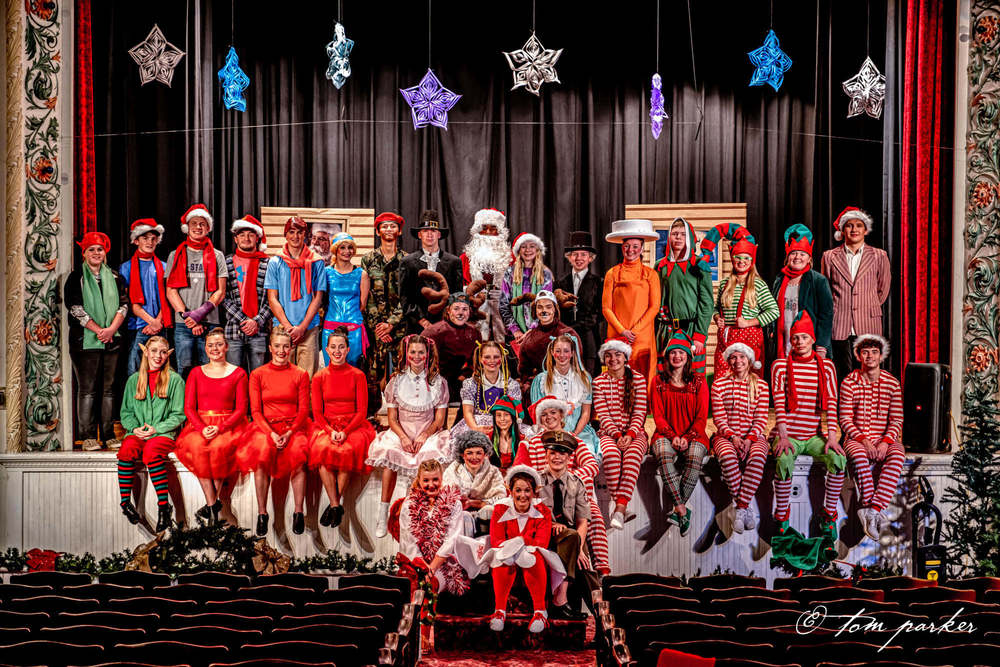 “All the world’s a stage and all the men and women merely players,” writes famed poet and playwright William Shakespeare. This year the All-School Play cast has decided to start a new tradition, these are the Paper Plate Awards. Cast and tech crew members have collectively voted on the recipients of each award.

The first set of these awards are Acting Honors. The award for Best Actor goes to Tyrel Wagner, for his roles as Santa and Crazy Hank. Recognized as the play’s Best Actress is Abigail Steinfort, for her performance as the Matchgirl and Grandma’s medicine bottle. This year’s Rising Stars are Tessa Miller and Anne Toerber, for their roles as Hank’s assistant and Baby Doll Four, respectively. The awards for getting the most laughs this year go to Kinsley Claycamp as Meryl, and Dakota Gillig as Eggnog. The actresses recognized as the Most Understood were Abigail Steinfort, Catherine Toerber, and Emma Yungeberg. Maggie Toerber is awarded with the Best Recovery of a missed line. For putting so much emotion in their part, Jay-Lynn Bauer takes the cake for Most Expressive. Out of the numerous elves in the cast, Maecyn Gunn and Liam Shill, stand out above the rest and were named the Best Elves. For their sunny disposition during the play, Catherine Toerber wins the Sparkle Award. Emma Yungeburg always had her lines perfectly memorized, winning her the No-Prompt award. For his resounding voice, Dustin Denton has been named the Most Vocal. The awards for the Best Comedic Timing goes to Dakota Gillig and Kaylee Skalla for their roles as Eggnog and Baby Doll One, respectively. The award for Best Scene goes to Anne Toerber, Kaylee Skalla, Maddy Vermetten, and Harmony Conti for the Baby Doll scene.

The Play has an amazing cast, both on and off stage. These awards for dependability, enthusiasm and determination are our Character Awards. First, is the award for Best Techie, which goes to Caden Parker, for his timing and efficiency. The Best Team Player award goes to Michelle Sandoval for her steadfast commitment to both the play and her castmates. Next, is the Most Organized award, which goes to Maecyn Gunn for always being prepared and ready for her role and her behind the scenes work. Due to her flair for the theatrical, Maddy Vermetten has been named the Most Dramatic. For calmly accepting and acting on input from the director, Audra Steinfort and Harmony Conti win the award for being the Most Coachable. For her almost unending patience, Taya Smith has earned the Longest Fuse award. For their dedication and leadership, the awards for Most Responsible Actor, Actresses, and Tech, go to Aiden Nemechek, Lilly Busey, Kinsley Gillig, and Audrey Nordquist, respectively. The Most Improved awards go to Robert Limon and Maggie Toerber for making the greatest leap in their acting skills. For always arriving on time, being helpful, and full of energy, Caden Parker, Lawson Stryker, Trayton Claycamp, and Delana Murk are named Most Spirited Tech.

These Odd-Ball Awards are a reflection of inside jokes, behind the scenes information, and general good humor. The Awards for Mister and Misses Diva go to Logan Gray and Janelle Medina. The awards for the Most and Least Like Their Character go to Aiden Nemechek and Maddy Vermetten, respectively. The awards for being “Mother Hens” go to Taya Smith and Khloe Gunn. For his sometimes argumentative nature, Dustin Denton wins the “Arguing Like An Old Married Couple” award. For his comical forgetfulness, Robert Limon is definitely  the “Most Likely to Forget Something.” For her occasional clumsiness, Haily Stoudt is named “Most Likely to Fall.” For always being up on fresh gossip, Olivia Skalla and Tanner Meadows won “Gossip Girl/Guy,” respectively. For his constant chatter, Trayton Claycamp has won the “Chit-Chat Award.” For general good spirit and willingness to help, Alexis Miller, John Haefke, and Tanner Meadows win the “Holly Jolly Award.”

The cast of the All-School Play would like to specially thank Alex Shultz for hosting their watch party and awards ceremony at the Astro3 Theatre in Marysville.