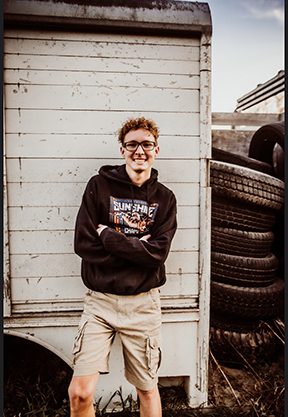 DO GREAT THINGS. Breindel Emanuel Wisdom was born October 15, 2003 to Kim Wisdom and Scott Wisdom. He doesn’t have any siblings, and is quite proud of it. He said, “It’s great. I don’t have to worry about putting up with a sibling.”. When we asked Breindel what his ideal Friday night would be, he said, “I would cruise around with friends or go watch dirt track races.” Breindel likes to eat mac & cheese, preferably with a hamburger. He also likes to listen to country music by artists like Morgan Wallen.

Breindel says his mother is his idol. He says she’s supportive and always there. Breindel claims she’s the reason he can follow his dreams and also why he keeps going. Breindel plans to attend Wichita State. When asked what he would like to study, he said, “To be honest, I’m unsure. I’ve been thinking about getting into sports journalism or dirt track racing. Those things are very exciting.”

Breindel has bright plans for his future. When asked where he saw himself in five years, he gave a variety of options. He first stated that he envisioned himself still studying to be a sports analyst or journalist. He also said that he could see himself racing dirt track for a living. To conclude, he said that he was, “honestly still unsure” about where he would actually be.

Brandy Turner, high-school math teacher and Breindel’s senior advisor, noted, “Breindel might be quiet, but I've noticed that he picks up on things quickly. If he uses that ability to his advantage, he will do great things. He’s really smart.”