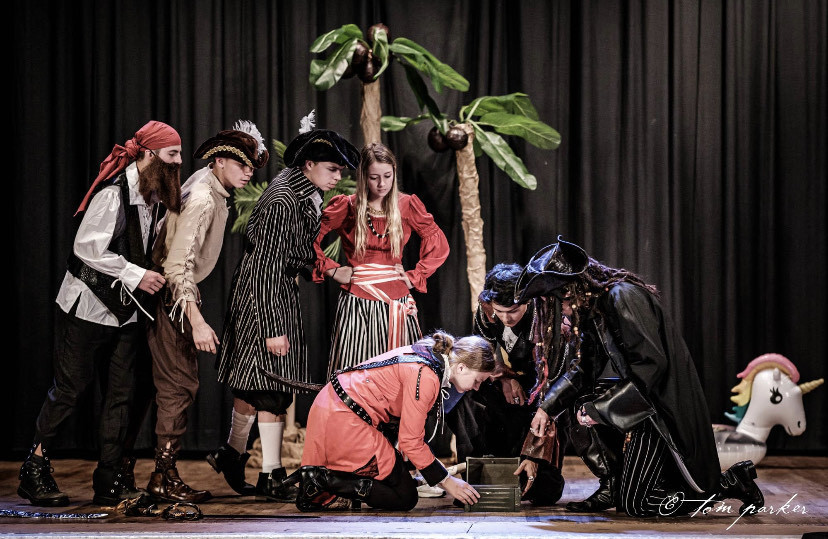 SILVER'S SECRET. It’s that time of year again! The All School Play Cast is performing their crowd shocking performance. This year the cast is performing a play called Silver’s Secret. There are many different characters that play big roles in this play. Including characters like mermaid cheerleaders, smugglers, pirates, sea creatures, and even ghosts! This production is not only humorous but is very sweet and heartwarming.

A brother duo that is opening up the play singing, A Pirates Song, by Kenny Chesny. One of the mermaid cheerleaders that is so peppy and keeps the mermaids together is Pearl! Played by Anne Toerber she said, “I love getting to show people all the work we put into this play. I also love getting ready with my friends on opening night.” Lawson Stryker, also known as Long John Silver, the main pirate in the production said, “I love the play because I get to die!” Lawson is also included in many music pieces that will be key moments in the play. Kaylee Skalla plays Red Beard Smee’s and she said, “Yes, I’m very excited for the play because it’s my last one and I have a pretty big role.” Royce Ektrum is a newcomer this year and is playing the role of Butler in the bar scene. He said “Yes, I’m super excited because it’s my first year and practice has been enjoyable for me.” Another new actor this year is Mack Shanks, he’s included in a music piece as well. Mack said, “I’m excited for the play because it’s my first year and I have had fun acting this year.”

Director Lynette Coon has been directing the play for 15 years. “Yes, I’m very excited for the play. First of all we haven’t done a pirate play in 12 years and they’re always a lot of fun for the cast and audience. The parts are usually fun for the characters. Secondly, I can’t wait for the audience to experience all the different types of music between scenes. Mrs. Coon goes on to talk about the music pieces in a very positive way. “This is not a musical perse, but a pirate play interspersed with a musical variety show of pirate-themed music. We have everything from sea shanties to country to hip hop to medieval madrigal music, it really showcases our kids musical abilities. To see this excellent performance, travel to the Waterville Opera House on Friday and Saturday night at 7:00 pm and Sunday at 2:00 pm.