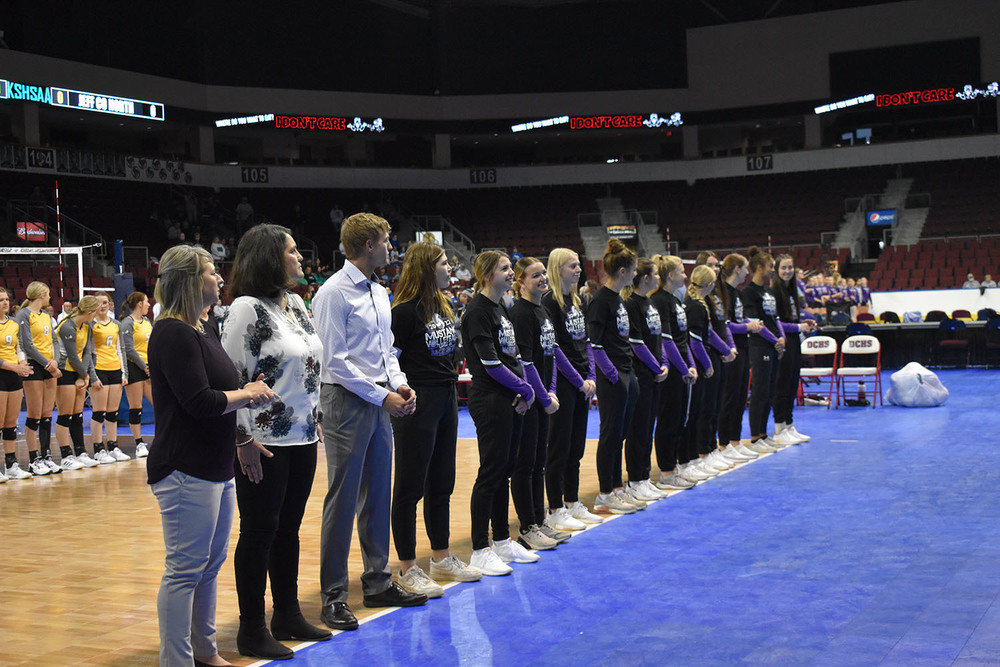 The Lady Mustangs had a very rewarding season this year, going 26-15 all season. They first began the season participating in the preseason Marysville Invitational Tournament. The Mustangs ended with third place.

The ladies headed into their league games and had a hot start, going 4-0. The Riley County Tournament came up quickly, they ended the day with a third place finish. The volleyball season goes by super fast and the girls have tons of bonding experiences with two-a-days, practices, games, and tournaments on the weekends. Junior Maggie Toerber said, “My favorite core memory of this season was throwing a surprise wedding party for Coach Green. Anne made a very special video for him, and it may have made him shed a few tears!”

Another invitational tournament came around, in Axtell. The Lady Mustangs concluded the busy day with yet another third place medal to bring home. Over the course of the season they finished 7-5 in league games, placing them fifth in the Twin Valley League Tournament. Though they did not finish as they would have liked to, it was a learning experience for the next few weeks to come. Senior Taya Smith gave advice to underclassmen, “It gets easier! As a freshman there is a ton of learning involved, and it can be very overwhelming. Just keep pursuing and pushing yourself, you are not alone,  advice to underclassmen from senior Taya Smith.

The following week of practice consisted of scouting other teams, but also focusing on themselves. As first year coach, Cale Green would say, “Fine tune the little things, for bigger results!” The Mustangs put tons of time and effort in for one weekend, sub-state! The ladies were seeded #2 in the tournament. Their first game was against seed #8 the Republic County Buffalo. Then moving onto the next round versus #3 seed, St Marys Bears, beating them in two sets to move onto the championship game. #1 Maranatha versus #2 Valley Heights Mustangs! Winning in three sets, the Mustangs advance another week to Dodge City for the 2A state tournament. Junior, Brooke Porter said, “The most amazing feeling this season was the turning point after beating St Marys and Maranatha. A couple weeks prior we had a few struggles, but it was well worth the fight!”

After spending all week bettering themselves for the tough upcoming weekend, Thursday morning the Lady Mustangs got sent off with the help of the Marching Mustangs, students, teachers, and members of the community. The bus stopped at both the elementary and grade schools for the young students to wish them good luck! Then stopping at Kansas Wesleyan for a quick practice and getting back on the road to Dodge.

Saturday morning the volleyball team woke up bright and early to head to the Dodge City-United Wireless Arena for their big day ahead! Introductions of all 2A teams were at 7:45am. The Mustangs began playing Smith Center, which ended in a loss. Moving on to play Inman and finishing with another loss. Finally playing Garden Plains and closing the day with a win! Though the Mustangs did not move onto the semifinals, the season was a wonderful learning experience full of ups and downs. Head Coach, Susan Steinfort said, “This season was a particularly meaningful one with so many new faces on the floor. Volleyball is a game that takes time, trust and patience to build the inner workings of a great team.  I felt like these things came together for all players at all levels during the season.  Winning Sub-State was icing on the cake for our Journey, but even if we had not accomplished that, it still would have been a sweet and satisfying season.  Accomplishing what others thought may not be possible for this team was a great confidence boost and solidified their own identity within a strong Valley Heights tradition.”