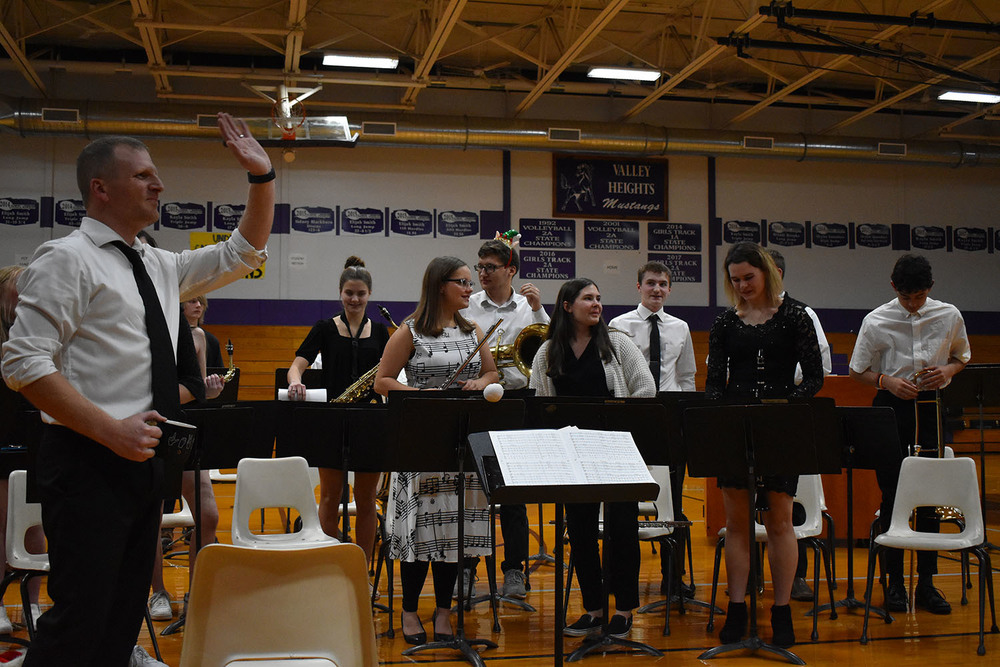 OBSESSION AND PROFESSION. Ben Worcester graduated from Kansas State University with a Master’s degree in Music Composition and Music Theory in 2010, a Bachelor’s degree in Music Education in 2006, and a Bachelor of Science in Bible from Manhattan Christian College in 2006.  Music has always been his obsession. He is able to share his joy with the students at Valley Heights, as he teaches all music related courses at VH. He just recently began teaching a new guitar class.

During lunch on Friday, December 2nd, junior high students were treated to a sneak peek of the guitar concert.  “It was a free show during lunch so I really enjoyed it. I’m in guitar class myself and it was really cool seeing them perform. Robert Limon, senior, is a good singer with a soothing voice,” remarked Noah Uribe, eighth grader.

On December 13th, the Valley Heights guitar and vocal class performed "Ho Hey" by The Lumineers, “Hey There Delilah” by Plain White T’s, and lastly “Take Me Home, Country Roads” by John Denver. Both classes have been practicing their songs for weeks. Ruger Ryan, freshman, said, “I think the concert will be interesting. It’s going to be the first thing we’ve done with what we have learned in the class.”

The high school and junior high band also performed at the Christmas concert. The junior high played “Star Spangled Banner '' and “Down Through The Chimney”. Then followed by the high school band, “Excalibur”, “Christmas Fantasy”, “Halloween Waltz” and “5”. During their last song, “5” Mr. Worcester jokingly snapped his baton and made the crowd burst into laughter. Then he walked away and grabbed his most loved item of all, his coffee, making the crowd giggle once again. “I thought the concert was amazing. Students did an excellent job, especially the guitar and vocal class in their first ever performance. We have definitely taken a step up this year.” said Mr. Worcester.

Stay tuned as the guitar, vocal, and band classes prepare something special for the spring concert!